Syrian Refugees in Turkey: The Long Road Ahead Turkey now hosts the world’s largest community of Syrians displaced by the ongoing conflict in their country. According to United Nations estimates, Turkey’s Syrian refugee population was more than 1.7 million as of mid-March 2015, and the large unregistered refugee population may mean the true figure is even larger. Turkish reception policies at the outset were predicated on the assumption that the conflict would come to a swift conclusion, allowing the  displaced Syrians to return home, but as conditions continue to deteriorate in Syria and the conflict stretches into its fifth year, it has become clear that a shift in policy to encompass longer-term solutions is needed.
The Syrian refugee crisis arose as the Turkish government was in the midst of overhauling its immigration system to meet international—and, particularly, European Union—standards. The implementation of these reforms has limited Turkish authorities' capacity to manage the Syrian inflows, and as a result, management of the crisis was left largely in the hands of national organizations working on the ground, in camps, without larger policy guidance. Meanwhile, formal immigration channels, including recognition of refugee status, remain restricted to Europeans, while non-Europeans receive temporary protection status and are expected at some point to resettle in a third country.
Read more »
No comments:

Email ThisBlogThis!Share to TwitterShare to FacebookShare to Pinterest
Etiketler: Reports

AS conflict continues to ravage Syria, and the number of internally displaced people grows, we can lose sight of individual stories.

Last month, I visited one the largest UNHCR camps, Camp Suruc, at the Syrian/Turkish border. It houses around 35000 people in 7000 tents. Most of the refugees are Syrian. Out of the 3 million refugees that Turkey is hosting, 2.7 million are Syrian. Most refugees in this camp were Kurds.
The camps are divided into 15 neighbourhoods and this small village has basic shops, a hairdresser, and a supermarket.

The Turkish officials talked about their “Syrian brothers and sisters” and explained they were ‘‘guests’’ in their country. This language says a lot.
Within the camp — and in houses outside the camp — I met kind men and strong women and resilient children, all of whose lives have been shattered, all of whom had trauma.
Many were white-collar workers, such as public servants and qualified professionals. They fled their homes with little more than the clothes on their backs and, often, with relatives left behind.

Email ThisBlogThis!Share to TwitterShare to FacebookShare to Pinterest
Etiketler: Articles

‘Poverty rivalry’ among the poor in Turkey

There is a change in the story of poverty in Turkey. As those at the lowest level of the social income ladder climb over time, other groups take over the “poverty duty.”


Seasonal mobile agricultural labor is one of the stops where different social groups take over at different times. Poor people from Georgia, Azerbaijan and Syria are added to the existing workers from Turkey’s east and southeast. Now they are all struggling to do the same job – struggling with each other and also with workers from Turkey. This is reflected in wages and conditions.

The most recent field reports show that poverty has turned into a competition between the poor. More than one group is competing for the same job at the same time.

With the addition of foreign migrant workers from different countries to the workers of different ethnic origins, rivalry within the poor has been fueled. The report says that with the inclusion of the Syrians in agricultural production, a portion of local workers have been excluded and worker fees have declined. The most important criteria in wages is whether or not there is competition among agricultural workers. The lowest wages are in Gaziantep and Çukurova because there are many Syrian workers there.

Email ThisBlogThis!Share to TwitterShare to FacebookShare to Pinterest
Etiketler: Articles

The European Union (EU) must immediately halt plans to return asylum-seekers to Turkey on the false pretence that it is a “safe country” for refugees, said Amnesty International in a briefing published today.

The briefing, No safe refuge: Asylum-seekers and refugees denied effective protection in Turkey, details the short-comings in Turkey’s asylum system and the hardships refugees face there that would render their return under the EU-Turkey Agreement of 18 March illegal – and unconscionable.

The briefing shows that Turkey’s asylum system is struggling to cope with more than three million asylum-seekers and refugees. As a result, asylum-seekers face years waiting for their cases to be dealt with, during which time they receive little or no support to find shelter and sustenance for themselves and their families, with children as young as nine working to support families.

Email ThisBlogThis!Share to TwitterShare to FacebookShare to Pinterest
Etiketler: Reports

PRO ASYL calls for an end to the inhuman large-scale experiment in the Aegean – stop deportations to Turkey!

Yesterday night three positive decisions by the Administrative Appeals Committee of Lesbos were published. Lawyers of the PRO ASYL project “Refugee Support Program in the Aegean (RSPA)” represented nine Syrian protection seekers before the second instance on 20 and 21 April. The concerned asylum seekers were greatly relieved to receive the news that their deportation to Turkey has now been stopped. By now ten decisions by Appeals Committees have been published in which it is asserted that Turkey is no “safe third country” for Syrian refugees. There are a number of further positive decisions which have not been delivered yet. Despite of massive pressure from the European Commission and the responsible Greek Minister for Migration, the members of the Appeals Committee held up and decided in favor of the protection seekers.
“We thank our lawyers and the whole RSPA-team for their work and dedication. Since the commencement of the cynical deal with Erdogan our project partners are working day and night in order to support protection seekers in exercising their rights in spite of an unlawful procedure” says Karl Kopp, PRO ASYL Director of European Affairs.

165,000 Syrian refugees trapped between ISIS and the Turkish border

The UNHCR says it has alerted Turkey of the situation and reiterates the rights to refugee protection and safe passage, as enshrined in international law.

Medical aid agency Médecins Sans Frontières (MSF) reported yesterday that it was evacuating its staff and patients from the hospital in Al Salamah because of the ISIS offensive in Azaz, again citing concern for those trapped between the terrorist group and the Turkish border.
Read more »
No comments:

Email ThisBlogThis!Share to TwitterShare to FacebookShare to Pinterest
Etiketler: News

The Many Failures of the EU-Turkey Refugee Deal

Many viewed it with skepticism from the start and now, the Brussels-Ankara refugee deal is in danger of collapse. Refugees are being locked up in Turkey and it looks as though the best educated Syrians are not being allowed to continue to Europe.
If there is one thing Ayasha Nour never wanted to experience again, it was to be locked up without knowing what was happening to her. Nour, a French teacher from Damascus, spent 20 days in Moria, a refugee camp on the Greek island of Lesbos. She slept on the ground in an overcrowded tent and it was cold with not enough to eat. She repeatedly asked the Greek officials when a decision would be made on her asylum application, but they kept putting her off. "Sometimes they would say a week, sometimes a month and sometimes a year," says Nour.
At the end of April, the young Syrian gave up hope of ever reaching northern Europe, so she decided to return to Turkey voluntarily. Officers with Frontex, the European Union's border protection agency, accompanied Nour and 11 other Syrian refugees on the flight from Lesbos to southeastern Turkey. According to Nour, before she left Lesbos officials had promised that she could apply for asylum in Turkey and would be allowed to move around freely there. But immediately after landing in Turkey, she and the other returning refugees were taken away -- as if they were criminals, says Nour.

Email ThisBlogThis!Share to TwitterShare to FacebookShare to Pinterest
Etiketler: News

Only 177 Syrian refugees resettled in EU under deal with Turkey 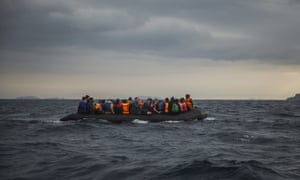 Fewer than 200 Syrians have been resettled in Europe under the EU’s controversial refugee deal with Turkey, figures from the European commission have revealed.

EU leaders agreed in March to take one Syrian from Turkey for every irregular migrant sent back across the Aegean Sea. Since the deal came into force, the number of people arriving in Greece has fallen sharply, but Europe has taken only a tiny number of Syrians from Turkey.
A total of 177 Syrians who were in Turkey have been found homes in five EU member states, the figures showed.

Sweden, Germany and the Netherlands have taken the most people, 52-55 each, while Finland and Lithuania have taken a smaller number (11 and five respectively). A further 723 Syrians are awaiting transfer to seven different member states, the commission said.

Turkey was also promised €3bn (£2.3bn) of refugee aid until 2018 as well as visa-free access to the EU, subject to conditions. But the deal is at risk of unravelling as Turkey refuses to change its anti-terror laws to meet a key EU demand on visa-free travel.

News, reports and other documents on Syrian refugees in Turkey.